Tolentine's Septenary Masses for the Dead

Beside the ordinary Masses for the dead, in our Order we celebrate and offer what is called “TOLENTINE'S SEPTENARY OF MASSES FOR THE HOLY SOULS” for people who request it, that is, SEVEN CONSECUTIVE MASSES CELEBRATED FOR THE RELEASE OF A HOLY SOUL IN PURGATORY following the example of SAINT NICHOLAS OF TOLENTINE. Here you can offer an stipend to our priests as alms for their maintenance, asking them to apply during a week a daily Mass for the deceased faithful you desire. (Remember that the stipend is NOT GIVEN AS A PRICE for the Eucharistic Sacrifice. Sorry if below appears the expression "price"; it is because the system does not permit to change it) 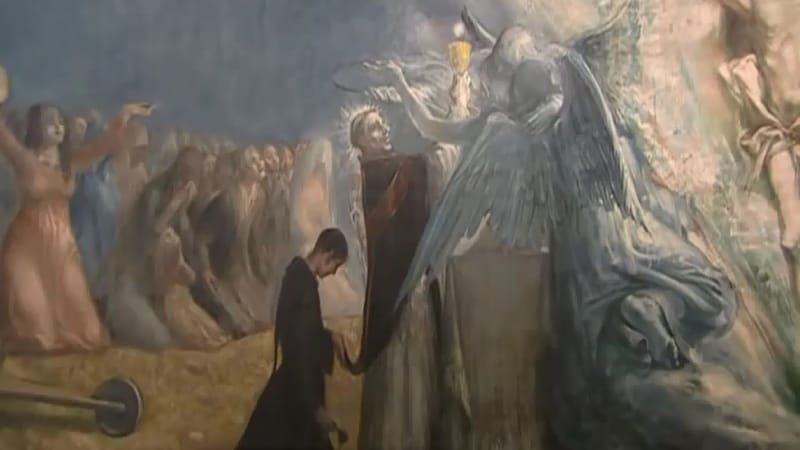 Here in Saint Rita’s Centre, we the Augustinian Recollects friars invoke the special intercession of our great Saint Nicholas of Tolentine, who was solemnly declared Patron Saint of the Holy Souls by Pope Leo XIII in 1884. This confirmed a long-standing aspect of devotion toward this friar which is traced to an event in his own life. On a certain Saturday night as he lay in bed, Nicholas heard the voice of a deceased friar whom Nicholas had known and whose name was Pellegrino. He begged Nicholas to offer Mass for him and for other suffering souls in the Purgatory so that they might be set free. For the next seven days Nicholas did so and was rewarded with a second vision in which Fr. Pellegrino expressed his gratitude and assurance that a great number of people were now enjoying the presence of God through Nicholas’ prayers. As this event became known, many people approached Nicholas, asking his intercession on behalf of their own deceased relatives and friends. St. Nicholas had a great love for the Holy Souls. He would offer Mass, pray and do penance for them so they could more quickly enter Heaven.

Therefore, beside the ordinary Masses for the dead, in our Order we celebrate and offer what is called “Tolentine’s Septenary of Masses for the Holy Souls” for people who request it, that is, seven consecutive Masses celebrated for the release of a Holy Soul in Purgatory following the example of Saint Nicholas of Tolentine.

May God, through the intercession of St. Nicholas of Tolentine, give prefect purification to your faithful departed so that they can enjoy in Heaven eternal Peace and Joy living for ever in the presence of the loving God.

THE OFFERING OF THE MASS AND THE ESTIPEND MEANING

Any Catholic may offer up the Mass in which he or she participates for any good intention. Certainly, graces will accrue in accordance with the intensity of that person’s participation and sincerity. This is a genuine exercise of the royal or common priesthood of the faithful.

However, the custom of requesting a priest to offer the Mass for a specific intention, even when one cannot be physically present at the Mass, is a longstanding tradition in the Church.

This is because the Church considers the Mass as the greatest possible prayer of intercession insofar as it is the perfect offering of Christ to the Father by making present the paschal mystery of his death and resurrection.

Because of the particular role of the priest as mediator between God and man, acting “in persona Christi” when offering the holy sacrifice of the Mass, it is usually considered that special graces may be obtained when he applies the Mass to a particular intention.

The faithful generally make an offering, called a stipend, to the priest in order to apply the Mass to a specific intention.

Mass stipends are thus the offering given to a priest as alms for his maintenance, in return for which he promises to offer a Mass for the donor's intention. By making this offering, the faithful, by parting with something that is their own, associate themselves more intimately with Christ who offers himself in the sacred Host, and obtain thereby more abundant fruits (See Pope Paul VI’s letter “Firma in Traditione” of June 13, 1974).

The offering of a stipend is also a means whereby Catholic may contribute to the upkeep of the clergy, and the Church in general.

The stipend therefore is not given as a price for the Eucharistic Sacrifice.