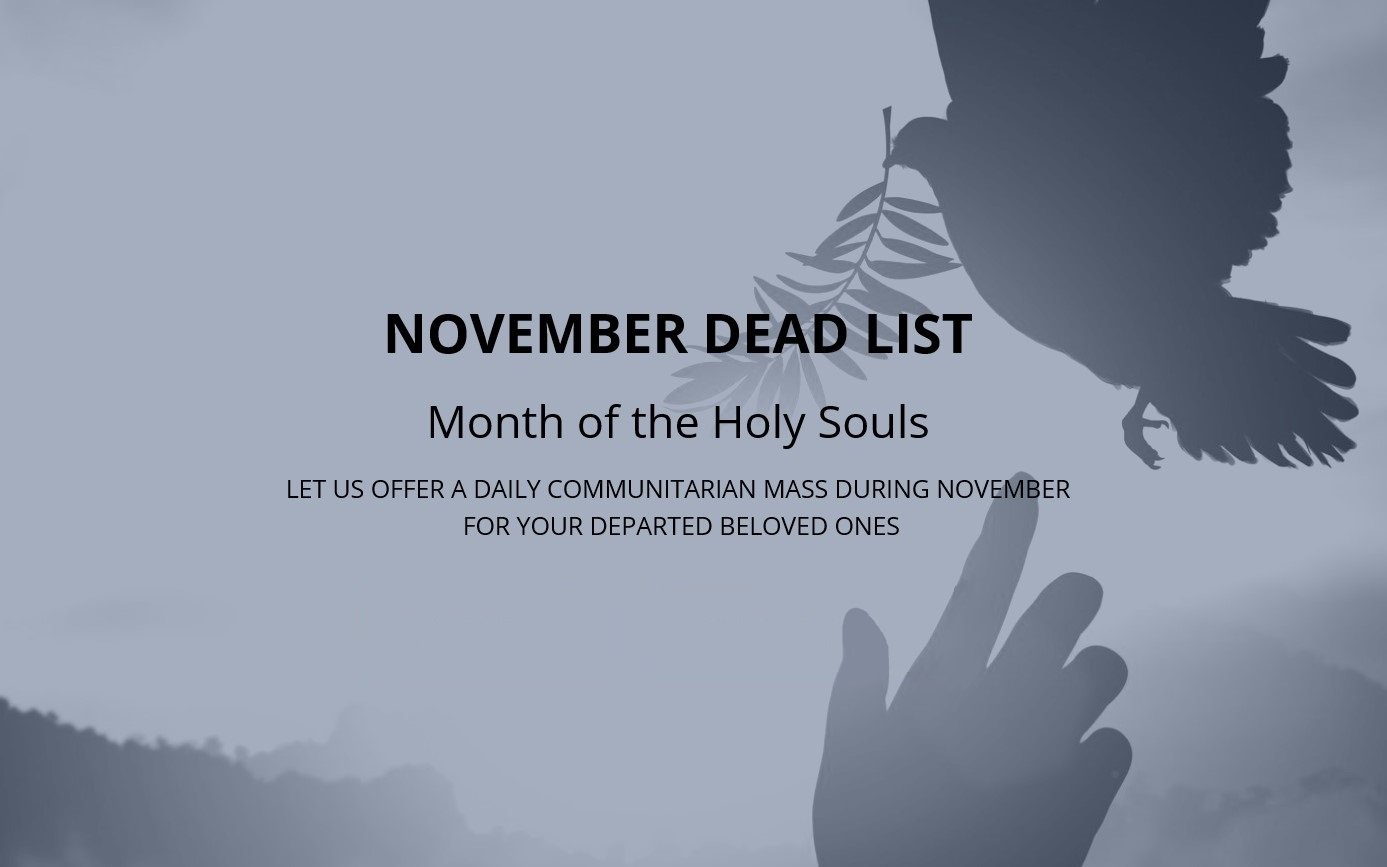 The month of November is dedicated to the Holy Souls in Purgatory, not simply to remember them, but with a view to encouraging the faithful to take spiritual steps to assist their release into Paradise.

From the beginning the Church has honoured the memory of the faithful who having died in grace and communion with God, still need purification for their venial sins and for the temporal punishment incurred by them and not yet satisfied in their earthly life, and has offered prayers in suffrage for them, above all the Eucharistic sacrifice, so that, thus purified, they may attend the beatific vision of God.

The Feast of All Souls, the general commemoration of the faithful departed on the 2nd of November is an expression of the Communion of Saints, uniting the Church Militant on earth with the Church Suffering in Purgatory. The doctrine of Purgatory is a dogma of faith rooted in the Bible and in the Tradition of the Church and has been formally define by the solemn magisterium of the Church.

Here in Saint Rita’s Centre, we the Augustinian Recollects friars invoke the special intercession of our great Saint Nicholas of Tolentine, who was solemnly declared Patron Saint of the Holy Souls by Pope Leo XIII in 1884. This confirmed a long-standing aspect of devotion toward this friar which is traced to an event in his own life.
On a certain Saturday night as he lay in bed, Nicholas heard the voice of a deceased friar whom Nicholas had known and whose name was Pellegrino. He begged Nicholas to offer Mass for him and for other suffering souls in the Purgatory so that they might be set free. For the next seven days Nicholas did so and was rewarded with a second vision in which Fr. Pellegrino expressed his gratitude and assurance that a great number of people were now enjoying the presence of God through Nicholas’ prayers. As this event became known, many people approached Nicholas, asking his intercession on behalf of their own deceased relatives and friends. St. Nicholas had a great love for the Holy Souls. He would offer Mass, pray and do penance for them so they could more quickly enter Heaven.

Donation for the Holy Souls

Thank you for your generous donation and for sending the list of your dearly departed relatives and friends; they will be remembered in the Holy sacrifice of the Mass every day during the month of November.

May God, through the intercession of St. Nicholas of Tolentine, give prefect purification to your beloved ones so that they can enjoy in Heaven eternal Peace and Joy living for ever in the presence of the loving God.

Prayer for a deceased person

Prayer for a deceased person
O Lord, God of holiness and light, you do not allow any shadow of darkness or evil in your sight and so in your mercy you grant to those who have left this world burdened with sin, time of purification, applying to them the spiritual treasures of your Holy Church.
Hear my prayer and through the merits of Christ, the Blessed Virgin, the Saints and all your faithful people bring to an end this time of waiting for our beloved dead, especially for N.
In your providence you have chosen Saint Nicholas of Tolentine as a special intercessor on behalf of the departed; hear also his fervent pray for those whom I recommend to you through his intercession.