Discover the great figure of Saint Augustine, the most important Father of the Occidental Catholic Church. 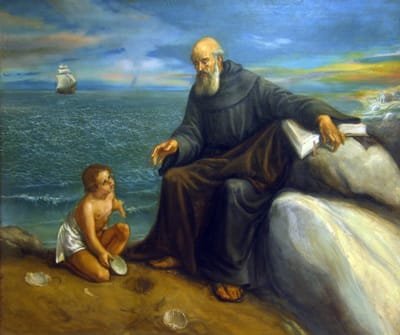 Augustine (354-430), an Algerian, was born to a pagan father, Patricius, and a Christian mother, Monica. He was educated in the North African cities of Tagaste, Madaura and Cartago. He entered the Catholic Church though baptism in 387. He was ordained to the priesthood of Hippo in 391 and bishop of the same city in 395. On the 24th of August 410, the soldiers of Alaric entered into the city of Rome by the gates of Salaria and proceeded to sake the city by iron and fire. This calamity inspired Augustine to preach his “Sermon on the fall of Rome” and to write the “City of God”. Two decades later, the army of Genseric laid siege to Hippo where its bishop died in 430.

Augustine was born on the 13th of November of 354 in Tagaste, a small city of Numidia in Roman Africa. Today, this north African town is called Souk-Ahras. Although Augustine was not baptized as an infant, Monica taught him the basics of the Christian religion. When she realized, however, that her son was separating himself from these counsels as he grew older, she turned to constant and fervent prayer. Years later, Augustine himself will call himself “son of the tears of his mother”. Being the fervent Catholic that she was, she lived her life dedicated to the conversion of her son to Christianity.

From the age of 12 until his 15th year, between 366 and 369, he studied the secondary level of studies in Madaura, today Mdaourouch. He stood out among his companions for his brilliance. He had a great love for poetry and learned complete passages from the principal authors which were studied at that time, namely, Terence, Plautus, Seneca, Salust, Horace, Apuleus, Cicero, and, above all, the great poet Virgil.

The friends of Patricius advised him to send his son to Carthage, the political capital and university city of North Africa. Money, which the parents did not have at the time, was needed. Because of this, Augustine, at sixteen years of age in the year 369-370, had to interrupt his studies and to wait for the financial assistance to continue his studies. He, thus, spent the year in Tagaste.

He apparently did not use this time wisely but became involved with a rowdy group of companions. He had not received baptism and had not received the religious instruction which, perhaps, would have kept him from evil conduct.

In spite of his mother’s advice, Augustine choose to go “the crooked ways on which walk those who turn their back on you and not their face toward you”. He was happy with the unexpected vacations and began to experience those early attractions of friendship and love. In 370, a year later, he left for Carthage thanks to the generosity of Romanianus, a wealthy patron of Tagaste and friend of his family. A little later, probably in 371, his father died, by then a Catholic. From the age of 16 until 30, Augustine lived with a woman from Carthage who name is unknown but with whom, in 372, he had a son whom he named “Adeodatus” meaning “gift of God”.

Augustine was around 20 years of age when he came into contact with the great books of philosophy. One such book which aroused his attention and which he read with great interest, was “Hortensius”, the work of Cicero, a Roman philosopher and famous author. Unfortunately, this book has not survived the centuries but, thanks to Augustine, we can reconstruct a few pages of the work to which he was so indebted.

It is recognized that this book opened his mind to invisible realities and awakened in him a profound desire to search for truth and wisdom. As a result of this reading experience, Augustine began consciously to look for the supreme truth, God Himself.

Shortly after, he began to read Sacred Scripture which he did not understand and which repelled him with the unusual content and what he considered inferior literary quality. This first encounter with Sacred Scripture left him with a feeling of deception and caused him to look in other places for the road to truth.

In his tiring and tenacious search for a solution to the problem of knowing the truth, he confronted such questions as whether or not one can know the truth and how is it distinguished from error. Augustine moved from one school of philosophy to another without finding an answer that would calm his unrequited quest. Finally, he made contact with Manichaeism thinking that this interpretation of reality might provide him with a rational and systematic explanation of everything and give him a moral orientation for his life. He followed this ideology for some years but abandoned it after his encounter with the Manichaean bishop, Faustus. This sought-after meeting left him disillusioned and convinced that the truth might well be unobtainable. As a consequence, he began to adopt the stance of the Sceptics.

During this time, he simply studied what came into his hands. He was fascinated with the books of astrology. Although Christianity had become the principal religion of the Empire, it was still fashionable to dabble in the “occult sciences”. When he finished his studies in Carthage, he returned to Tagaste where he taught grammar for a year, until 374. His mother, meanwhile, was disconsolate with the fact that her son was still very much under the sway of Manichaeism. From 374 until 383, he was professor of rhetoric in Carthage. During this period, he wrote a book on the “apt and the beautiful” which has not survived.

MILAN, THE BIRTH PLACE OF A CONVERSION

He decided quite spontaneously it seems and, keeping it a secret from his mother, to travel to Italy where he hoped to find a solution to his intellectual confusion and a satisfactory resolution of his religious doubt. He taught in Rome between 383 and 384 when he learned of an opportunity to apply for the position of professor of rhetoric in Milan.

When he arrived in Milan in 384, he no longer believed in the Manichean doctrines but had not yet grown close to Christianity. The Manichean criticism of the Bible, however, still influenced his thought. He would now enter into a decisive struggle in which the grace of God would be victorious.

The sermons of Ambrose, bishop of Milan, the wise counsels of Simplicianus, an intellectually well-prepared priest of the same diocese, and the example of the companions of his friend, Ponticianus, touched the heart of Augustine very profoundly. In addition, his mother, Monica, arrived in Milan in 385. During the spring of 386, he read the “books of some Platonists” and, in July, the writings of St. Paul. In August of 386, he came across a volume containing the “Letters of St. Paul”. He opened the book and the following text immediately caught his attention.

“Let us live honourably as in daylight; not in carousing and drunkenness, not in sexual excess and lust, not in quarrelling and jealousy. Rather put on the Lord Jesus Christ and make no provision for the desires of the flesh”. (Romans 13, 13)

Augustine needed to read no further. The words of St. Paul were for him “as if before a peaceful light streaming into my heart, all the dark shadows of doubt fled away”.

Augustine, who would be 32 in November of that year, had lived the most important day of his life. Before his conversion, he had thought of founding a kind of fraternity and common life with some friends and students dedicated to the study of the fundamental issues of philosophy. Once converted, however, he will accomplish this goal but now inspired by the early Christian community of Jerusalem.

Augustine was now dedicated to the formal and methodical study of Christianity. He gave up his position as professor and retired to Casiciaco, a place not far from Milan, with his mother and a few companions for the purpose of dedicating himself completely to study and to meditation. This took place during the fall of 386. On April 24 of 387, Ambrose, the saintly bishop, baptized the 33-year-old Augustine in Milan during the Easter Vigil ceremonies. Augustine, now baptized, returned to Africa in 388. Before leaving for Africa, however, his mother, Monica, passed away in August of 387.

Faced with need for assistance in the pastoral ministries of the diocese, Valerius, bishop of Hippo, in the midst of a liturgical celebration, responded to popular demand and ordained Augustine to the priesthood.

It was the year 391. He accepted his spontaneous election with tears in his eyes, a choice which he had previously vigorously opposed. Something similar would occur in 395 when he was consecrated bishop. When this happened, Augustine left the monastery of laymen and took up residence in the house of the bishop which would be transformed into a monastery of clerics.

Augustine’s task as bishop was both varied and enormous. He was totally dedicated to the ministry of preaching at home and throughout the region. He wrote tirelessly and challenged those who opposed Christian orthodoxy. He also presided at church councils and was called upon to resolve disputes presented to him by the faithful. Among those whom he confronted were the Manichaens, Donatists, Arians, Pelagians, Priscillians, and Academics.

The time of his final illness was spent reviewing his life’s work, giving thanks to God for the graces received, and, at the same, asking pardon from God and his brothers for his failings.

After 40 years of constant struggle on behalf of the Church, he entered into his final agony in preparation for his grateful entrance into the holy city of God. On the 28th of August of the year 430, Augustine, the son of Patricius and Monica, bishop of Hippo, died in the peace of the Lord. He was, at the time, 75 years of age, 10 months and 15 days.